A legal Analysis of Law No.16 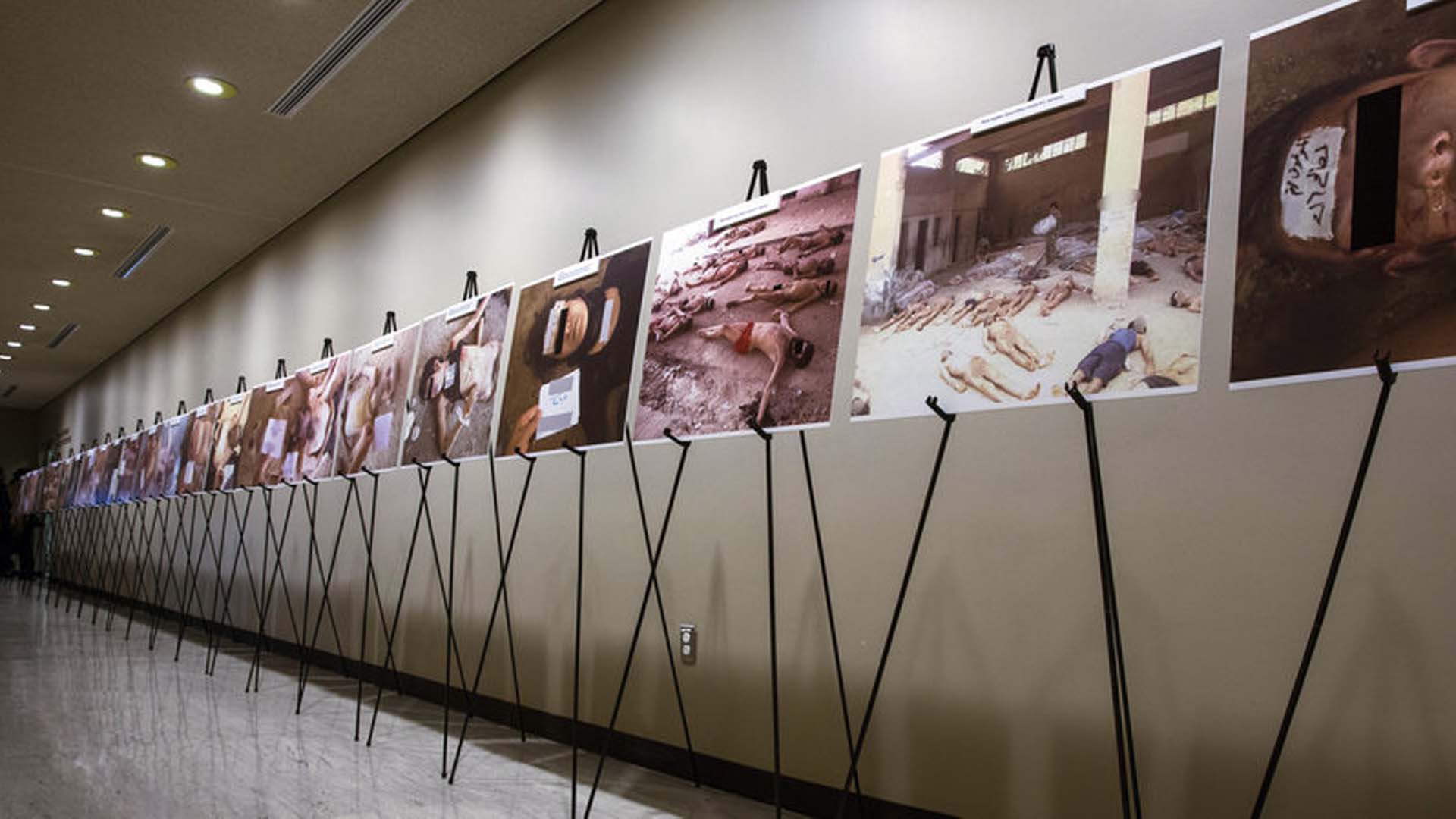 Firstly, Summery of the Law’s Articles:

The articles of the Torturing Incrimination Law included the following:

1- Definition of the crime of torture and a number of punishments applied on the crime committers. The Decree was issued according to Syria’s constitutional obligations that prohibits torturing, and to Convention Against Torture which was ratified earlier by the Syrian Arab Republic.

4- The law stipulates taking certain precaution to guarantee people’s right to file a complaint in concern with torture crimes and reporting them, providing protection for the complainant, reporting crimes mentioned in the law, maintaining confidentially and protecting witnesses and experts along with their family members.

Secondly, Torture in the Syrian Legislation and International Law:

2- General Penal Code: Punishment for the crime of torture is contained in the General Panel Code; as Article 391 of the law stipulates the imprisonment from three months to three years as a punishment for beating someone roughly in a way that the Law does not allow in order to obtain a crime confession of related information. If this violence leads to any disease or wounds, the punishment shall be a year of imprisonment. This Article is applicable only on people responsible for investigating in crimes, and it does not include torturing actions preformed otherwise.

3- The Universal Declaration of Human Rights: Article 5 “No one shall be subjected to torture or to cruel, inhuman, or degrading treatment or punishment.”

4- International Covenant on Civil and Political Rights: Article 7 “No one shall be subjected to torture or to cruel, inhuman or degrading treatment or punishment.” Article 9 “Everyone has the right to liberty and security of person. No one shall be subjected to arbitrary arrest or detention.” Article 10 “All persons deprived of their liberty shall be treated with humanity and with respect for the inherent dignity of the human person.”

6- International Criminal Law: Articles 1-7 of Rome Statute of the International Criminal Court considered torture a crime against humanity when committed in a widespread or systematic attack against a group of civilians, while being fully aware of the attack. Article 8 of the Statute also considered torture a war crime, particularly if the torture was committed during a non-international armed conflict, such as violating the common Article 3 of Geneva Conventions, in which torturing is not limited to material violent, but also including humiliating behavior or degrading treatment.

Although the Syrian Regime issued a law that incriminates torturing, there are decrees preventing prosecution by law or court, and executing the punishment against torture crime committers. In particularly government employees at the security systems such as Military Intelligence, Air Intelligence, Public Intelligence. Law No.16 of 2022 does not directly declares the cancelation of these decrees as invalid impractical decrees. The mentioned decrees are as follows:

1- Legislative Decree No.69 of 2008 altered the Military Penal Code in Syria, where the altered articles stated that only the army and armed forces’ headquarters have the authority to make decision in concern with prosecution of police officers, Political Security System and customs’ workers accused of practicing torture, despite the fact that they are admiratively under the command of the Ministry of Internal Affairs, not of the army and armed forces’ headquarters.

2- Legislative Decree of State Security No.14 of 1969 states the following, “State Security employees shall not be prosecuted for offences committed while carrying out their duties, unless it was through a prosecution order issued by the administrator.”

3- Legislative Decree No. 549 of 1969, in concern with Internal Regulations of State Security Administration and rules of its employees, states in Article 74 the following, “contractors or those who are employed at the Department of State Security, shall not be prosecuted by the judiciary system, in crimes arising from the nature of their work or in the course of performing it, before being referred to the Disciplinary Board of the administration and issuing a prosecution order by the administrator.” It was possible to sue police officers, Political Security System and customs workers for violations related to torture while “performing their duties” before normal courts. However, this was cancelled by Decree No. 69 of 2008.

As a result, the issued law must declare directly the cancelation of all decrees and laws that prevent the enforcement of this law’s provisions.

It is worth mentioning that the National Law states that incase of any contradiction between a national law and an international convention that the Syrian Arab Republic is a part of, the final word goes to the international convention. According to decision No. 23 of 1931 of Court of Cassation “Internal law shall not state rules that violate a previously declared international convention’s provisions or change, even indirectly, their enforcement”. Article 25 of the Syrian Civil Code further stipulates that “The provisions of articles that are superseded by, or conflict with, an international treaty in force in Syria shall cease to apply”. Furthermore, article 311 of the Syrian Code of Criminal Procedure stipulates that: “The above rules shall apply without prejudice to the provisions of treaties concluded in this connection between Syria and other States”. In conclusion, the Syrian Law states the principle of prioritizing the enforcement of an international treaty’s provisions over an internal law in case of conflict, such as issuing a law that incriminates torturing which should have been prohibited by law since it is prohibited according to the Convention recognized by the Syrian Regime or to the Constitution’s and Criminal Code’s articles mentioned above.

As a result, instead of issuing a law that incriminates torture, the Regime should have issued a legislative decree that cancels the Syrian Regime’s unacceptance of the profession of the Committee Against Torture mentioned in Article 20 of the Convention, and opens the doors of prisons, detain centers and security branches to the international committee to carry out a sudden and regular inspection in order to confirm that no systematic torture, which became an ingrained behavior at the security institutions, is committed.

As a result, the Syrian Regime should sign Rome Statute of the International Criminal Court if It wants to provide justice among the Syrian people and be transparent before the international community. It should also form a common international/ national court committee to sue crime committers against the Syrian people, and bring them to account according to the chained liability in accordance with the national law or the international law as a war crime or inhuman crime, along with purging the state devices of anyone who contributes in such crimes. In addition to achieving justice to torture victims who have survived and to families of those killed under torture, and compensating them on behalf of the Syrian Government.

1- Syria’s problem does not lie in the absence of laws, but rather in not respecting them by the Regime and Its security devices. There are laws, which incriminates torture, issued previous to this Decree. However, the problem is actually at the nature of the formation of this Regime and Its way in managing the country’s affairs and facilities, in which Its security devices control every detail in the country and is considered above every account and legal inquiry. Therefore, this absolute authority ruined all these devices and let their only attitude to be violence and cruelty, and “the power language” became their only method to communicate with Syrians and deal with them. It also made torture a political approach used to devastate the Syrians’ will and working on making them slaves of this Regime and its security agencies. Syrian Network for Human Rights documented, in Its report of 2019, a seventy-two torturing approach practiced by the Syrian Regime in Its prisons. Hence, the existence of this rule, its rudeness to issuing such a law and the Syrian Regime’s creativeness in creating torturing approaches confirm with no doubt that it is separated from reality. It also confirms that the Regime is not just a problem for Syrians, but rather a dilemma that has no way out except by the departure of this Regime along with Its security agencies, and the prosecution of all crime committers against Syrians.

2- The Regime is rude and dishonest enough, as usual, to believe that issuing such a decree would exempt It from giving account, as if this law is a shield that protects It before the international community, since It issued a law to incriminate torture and It does not allow such actions. At the same time, the crime obtained criminal characteristics the day it was committed before the national court. However, it forgot what was mentioned in the second part, which explains that torturing is prevented internationally according to the Convention on Human Rights and the International Covenant on Civil and Political Rights. Therefore, such crime committers will be punished in case a political reconciliation was agreed upon in Syria and international, mutual, or even national courts were established. A law does not change anything about this fact. Issuing a national law only confirms the peremptory norm of the international law. The international law will be practiced on every torture crime committer and this law will not be a reason to get away from punishment and giving account.

3– Since it was agreed internationally not to seek a military resolution, and there is no potential political solution considering particularly the political complications and attractions occurring in the area, active countries should work hard on the Syrian case in order to enforce decision No. 2254 of  2015 issued by the Security Council in concern with executing a real political transformation which Syrian have been demanding since the beginning of their revolution against this Regime and Its agencies that have ruled Syria for more than 50 years firmly and bloodily. Syrians have offered all kinds of sacrifices to achieve this goal since there is no solution accepted in Syria as long as this condition is not achieved, in accordance with a constitution that represents all Syrians and respects human rights principles as an inseparable part. A constitution that respects and protects the freedom and dignity of the Syrian citizen. All orders that declare the executive authority’s control of issuing decisions and distrain legal and court authorities should be canceled. Transformational justice should be applied in order to conciliate the security and military institutions to be loyal to the Syrian people only, and to execute prosecution and form real committees to apply just accounting and compensating the victims on behalf of the Syrian government that is legally elected to present the real demands of Syrians, and organize the social agreement that all Syrians can live according to in order to build Syria, the future of all Syrians and achieve permanent piece.